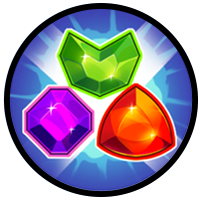 Gems
Gems are an extra source of power for your crabs. In terms of game lore, we presume them to be the "crystals" that have the radiation power that makes your crabs stronger and mutated into the beasts they are. You can see your number of gems by viewing the Gems panel from your game menu.

NOTE: "Worst Case Sets" is just an example - 0/3/3 could be 3/0/3 and 3/3/0 also. Just demonstrating that one could be the lowest while the other two sets could be completely maxed out before you advance.

For the "Average" we ran several million simulations and took the average number of gems to reach that full set.